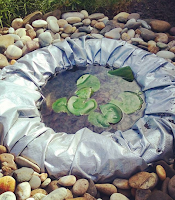 As a gardener on a budget and living in a rental home, I’ve often had to really re-think whether sites like Pinterest are my friend or foe. I’ve found myself kicking rocks in my substandard garden that is not filled with professional landscaping and thousands of dollars worth of water features on multiple occasions, wiping my tears with my $2 begonia petals.
One thing I’ve always wanted is a pond. Water plants open up a whole new world of gardening, but alas, I can not afford a pond, and my landlord made a point of saying ‘unless it’s the size of a car tyre – no’.
Well ha ha HA, joke is on you, Mr Land Lord Lady, because I decided to do exactly that. 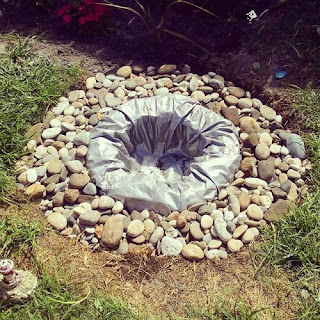 If you have a shovel, a spare tyre, (no, a spare spare, not the one in your boot you keep for emergencies – tempting as it is) a little tarp and a little time, you can do the same thing. It’s small enough to remove and fill in with no dramas, but big enough to house a lily or reed and a couple of gold fish.
Dig the hole to the size of the tyre, or bigger if you’d like to decorate the outside like I have with rocks, which I definitely did not steal from the beach. Wrap your tarp around your tyre, put it in the hole and then.. well that’s it. No seriously. 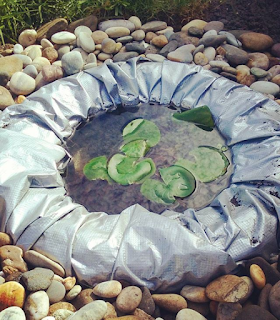 It’s not super fancy, but it’s definitely a pond. It’s also convenient. I’ve seen it done with truck tyres too which would be too much digging for someone like me (lazy). You could spray paint the tarp, or even build up the side of the pond with flat rocks either glued together or strategically placed. I’m waiting to see how my lily fares in the frost before adding any fishies, but I’ll keep you updated.
« Previous Post
Next Post »